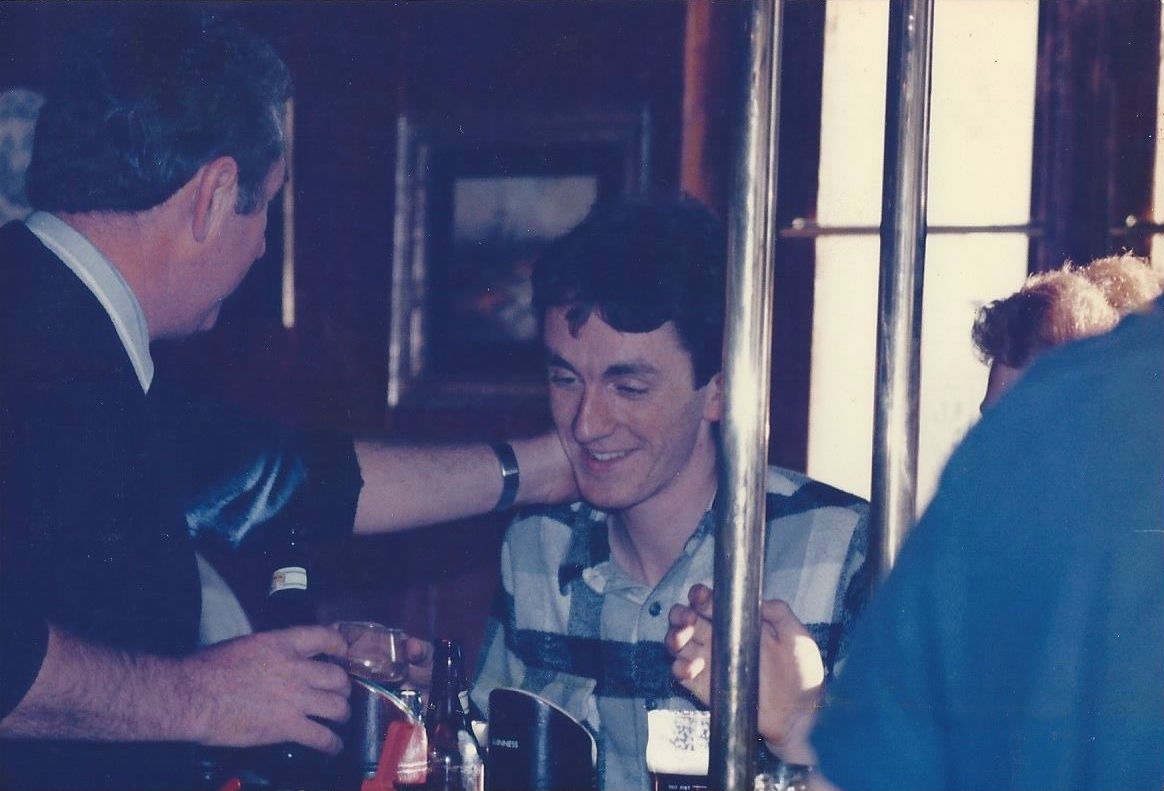 I ended the last “episode” with a reference to my immaturity at the time that I went to college in my late teens, and that sense of not having properly, formally grown up has stayed with me ever since. I’ll sometimes have a vague feeling, something like what is these days called imposter syndrome, as if I’m a child who has somehow managed to wangle a seat at the adult’s table. Over the years, I’ve put it down to the idea of never having experienced the rite of passage from childhood into adulthood, the initiation and transition from boy to man.

The closest I came to a rite of passage was a night drinking with friends from college to celebrate my 21st birthday, a couple of months before our final exams. I still remember sitting in Conway’s pub on Parnell Street in Dublin, when a couple of girls passed by. One was a former classmate from secondary school who at this time was a student at the nearby college of marketing and design. Recognizing me, she quipped, “Have you grown up yet?!” “Tonight’s the night!” I replied with the cockiness of a few pints. Only afterwards did it occur to me that she was probably referring not to my newly acquired status as a grown up but to the fact that my immaturity at school had been all too apparent. At least, that’s how I’ve interpreted it ever since.

Although I can still remember the early awakening of feelings about girls from my days in primary school, starting from maybe the age of 11, shyness and embarrassment ensured that my teenage years had been a total romantic washout. I had plenty of crushes but was so withdrawn that when a rare opportunity came my way, I didn’t even recognise it as such. Only years later, looking back, could I see what I had been too immature and self-conscious to understand. I feel a bit sorry for the couple of girls I went out with in college, because I was a pretty useless date, a bundle of nerves and not very good company. It was only toward the end of college that I finally experienced the beginnings of an actual relationship.

But fast forward a few months and after graduation and the glorious summer of Live Aid I found myself, like much of my generation, headed overseas in search of opportunities that pre-Celtic Tiger Ireland was in no state to provide. Thanks to a family connection, I landed on my feet with a job in London and another chance to start my life over again. I worked for a year or so for an architect in south London before getting the travel bug and heading out for a couple of months in Sri Lanka – where my father was chief pilot and training Air Lanka crew – Bangkok and Hong Kong. Although I’ve travelled a lot in my life, that was one of the few trips I embarked on by myself. In hindsight, I wish I’d done it more. When you travel solo, I think you’re more likely to meet new people and more free to be impulsive and go where the journey takes you.

Over the next few years, I got to know London pretty well. Which meant getting to know a lot of pubs well. But one that stands out, The Enterprise in central London, became a semi-regular for myself and friends from college because it was managed at the time by one of my father’s best friends. And one night we were there when none other than my father was also behind the bar, which is where one of my favourite photos was taken. Displays of tenderness and affection are not something I strongly associate with our relationship, so I treasure this this photo from 1986 because I think it captures such a rare moment.

When I first moved to London I had started out house sharing with friends from college, but I soon found myself making new friends and drifting further away from my past. Through a stint of amateur dramatics, I made a new best mate, Tom. We had shared interests in football, music and travel, but his passions for each of them were turned all the way up to 11 and I just went along for the ride. It was also through am-dram that I met my first “proper” girlfriend.

K worked for the BBC and was a wonderfully warm and grounded person. I met her parents (Irish mum and Scottish dad), who didn’t seem too upset about her going out with me. We also travelled to Ireland, along with Tom and his girlfriend, and she met my mum, who took to her straight away. But it wasn’t to last. My unreliable memory doesn’t serve me well here, but the gist of the situation was that K had plans to move to the continent and work for the European parliament while myself and Tom had slightly different plans.

We had working holiday visas for Australia and were planning to make the journey as epic as possible. The plan was to spend a month Interrailing, then head to Moscow and take the Trans-Siberian Railway across the Soviet Union and China to Beijing, and fly on from there to Australia. But the tragic events in Tiananmen Square put an end to any idea of travelling to China. As it happened, there was an alternative route, staying in the Soviet Union all the way across Siberia to the coast at Nakhodka, and then sailing for two days to Yokohama in Japan. We would stay in Japan for maybe a week or so of sightseeing before flying down to the southern hemisphere.

I know I really missed K when we left on our journey, and I had vague ideas of getting back together after a year on the road. But in those days before the Internet or even email, the letters between us became more and more irregular.

What’s more, we never made it to Australia. Instead, I was at the beginning of what turned out to be a totally unexpected 22-year adventure in Japan.